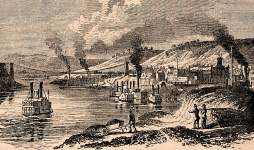 12/03/1861
At the constitutional convention of the seceding Virginia counties in Wheeling, for various reasons, the provisional name for the new state, Kanawha, was dropped and a debate ensued for a replacement.  Voted on in nominating style, other state names were proposed, till "West Virginia" emerged, strongly supported by Waitman T. Willey as the one by which the region was already widely recognized, with 30 of the 44 votes cast. (By John Osborne)
Source Citation
Chronicles of the Great Rebellion Against the United States of America (Philadelphia, PA: A. Winch, 1867), 16.
How to Cite This Page: "The Wheeling Convention votes to drop the provisional name "Kanawha" in favor of "West Virginia"," House Divided: The Civil War Research Engine at Dickinson College, https://hd.housedivided.dickinson.edu/node/38465.