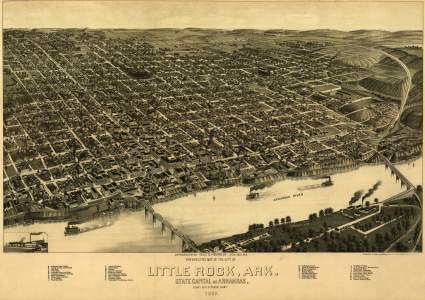 LITTLE ROCK, city, seat of justice of Pulaski co., and capital of the state of Arkansas, is situated on a rock, or bluff, on the south side of Arkansas river, at the head of steamboat navigation.... The town is well laid out, and has the usual number of churches and other public buildings, among which may be mentioned the statehouse, courthouse, and penitentary. The population in 1840, was 3,000; in 1850, 4,138. (Fanning's, 1853)
How to Cite This Page: "Little Rock, AR," House Divided: The Civil War Research Engine at Dickinson College, https://hd.housedivided.dickinson.edu/index.php/node/14860.