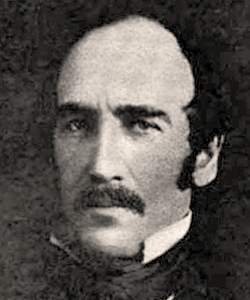 William Henry Bissell was a lawyer and Mexican War hero who helped found the Republican Party in Illinois and was the first Republican to sit as governor of the state. He was born to a poor farming family in upstate New York in April 1811, studied medicine, and went west to open a practice in Monroe County, Illinois in 1837. He was seduced by politics and the law, however, and was elected to the Illinois house in 1840. That same year he married Emily Susan James and had two daughters before Emily’s death in 1844. When the Mexican War broke out, he was elected colonel of Volunteers and served with distinction at Buena Vista in February 1847. Tall, slender, and of erect military bearing, with dark brown hair and grey eyes, he was elected immediately after his return as a Democrat to the U.S. Congress and served three terms. While in Washington, Bissell married Elizabeth Kane, daughter of the late Senator Elias Kane, who secretly converted him to Catholicism. He also began to suffer greatly from a debilitating illness, possibly secondary syphilis. He broke with the Democrats in 1854 over the Kansas-Nebraska Act and accepted the Republican nomination for Governor. His election was an important coup for the new Republican Party but his term was dogged by fierce Democratic opposition in the legislature and his failing health. He died of pneumonia in March 1860, in the final year of his term, the first Illinois governor to die in office. (By John Osborne)
Life Span
04/25/1811 to 03/18/1860
How to Cite This Page: "Bissell, William Henry," House Divided: The Civil War Research Engine at Dickinson College, https://hd.housedivided.dickinson.edu/index.php/node/17846.