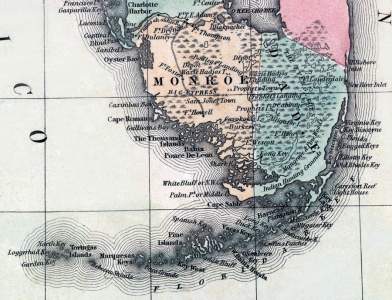 DADE COUNTY, situated on the southerly boundary of Florida, with the Gulf stream on the south and east, including several islands, or keys, near the adjacent coast. Area, 5,000 square miles. Face of the country flat, a large portion of which consists of "everglades," or a body of savannas, covered with water several feet deep, containing many small islets of fertile land, and cypress swamps. Seat of justice, Key Biscayune. Pop. in 1840, 446; in 1850, 159. (Fanning's, 1853)
How to Cite This Page: "Dade County, FL," House Divided: The Civil War Research Engine at Dickinson College, https://hd.housedivided.dickinson.edu/index.php/node/19670.