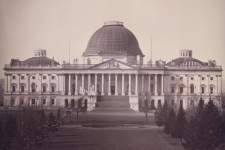 12/03/1855
The Thirty-fourth Congress of the United States opened in Washington, D.C. Of the 234 representatives, 85 were Democrats. Allied against them to form a majority were 100 "Opposition" or Republican members, and 51 representatives from the American Party. Nathaniel P. Banks of Massachusetts, sitting as an American Party member but later identified as a Republican, was elected Speaker of the House in February, 1856. (By John Osborne)
Source Citation
Office of the Clerk, U.S. House of Representatives, "House History."  http://clerk.house.gov/art_history/house_history/index.html
How to Cite This Page: "The 34th Congress opens in Washington, DC," House Divided: The Civil War Research Engine at Dickinson College, https://hd.housedivided.dickinson.edu/index.php/node/21822.