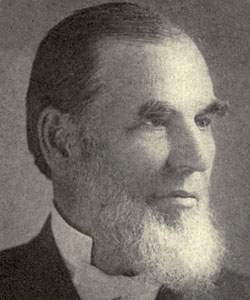 Leonard Swett set aside his own ambitions to become a trusted advisor to his old friend and law colleague, Abraham Lincoln. Swett was born on a farm near Turner, Maine but made his way west to seek his fortune. In Indiana he enlisted as a private in the war with Mexico but spent much of the conflict deathly ill in a military hospital at Matamoras. Discharged in St Louis, he settled in Bloomington, Illinois and began a career as a lawyer on the Illinois circuit. There he met Abraham Lincoln and his colleague David Davis who adopted and mentored the younger and still sickly former soldier. Tall and rangy like Lincoln and with considerable skills in the courtroom, Swett became an effective trial lawyer, particularly with murder cases where he had a remarkable record. He was less successful in his political career and only served one term in an official post, as a state senator in 1858. Unselfish and generous to a fault, he instead became an invaluable strategist and advisor to Lincoln, especially during the crucial period between 1856 and 1860 in Illinois and again in Washington during the crisis days before the 1864 election. Following the tragedy of 1865, Swett built a lucrative law practice in Chicago and devoted himself to his invalid wife and their son. In one final service to his friend, he represented Robert Lincoln with sensitivity and dispatch during Mary Todd Lincoln’s insanity hearing in 1875. He died in Chicago in June 1889. (By John Osborne)
Life Span
08/11/1825 to 06/08/1889
How to Cite This Page: "Swett, Leonard," House Divided: The Civil War Research Engine at Dickinson College, https://hd.housedivided.dickinson.edu/index.php/node/23997.