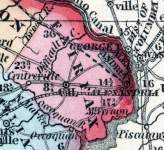 06/05/1860
J.B. Brown of Alexandria, Virginia, recently returned from the Republican National Convention where he had been a delegate, was arrested crossing the Potomac at the Long Bridge outside Washington DC on a charge of "circulating incendiary documents."  He was reported to have had on his person several such items, including copies of Hinton Helper's Impending Crisis which was banned in Virginia.  He was released on $2000 bail.  (By John Osborne)
Source Citation
"Arrest for Circulating Incendiary Documents," New York Times, June 12, 1860.
How to Cite This Page: "Virginia Republican arrested for circulating anti-southern literature," House Divided: The Civil War Research Engine at Dickinson College, https://hd.housedivided.dickinson.edu/index.php/node/32253.