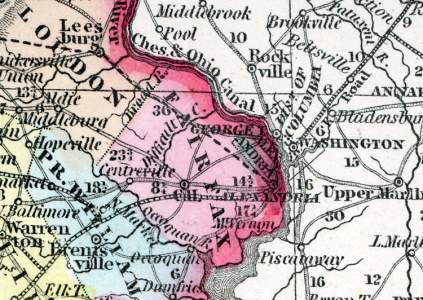 FAIRFAX was formed in 1742, from Prince William, and named after Lord Fairfax, the proprietor of " the Northerly Neck." The part of Virginia included in the District of Columbia was formed from Fairfax. The county is watered by the Potomac and the Occoquan, and their branches. Pop., whites 5,469, slaves 3,453, free colored 448; total, 9,370. (Historical Collections, 1852)
How to Cite This Page: "Fairfax County, VA," House Divided: The Civil War Research Engine at Dickinson College, https://hd.housedivided.dickinson.edu/index.php/node/15851.