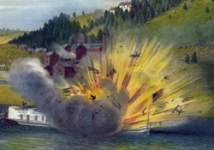 12/08/1860
The Scientific American magazine reported that deaths aboard American steamboats totaled 487 in the first eleven months of 1860.  The journal noted that fatalities from explosions aboard steamboats, numbering 93 so far, was at its lowest number since the new system of steamboat inspections had been instituted.  Most deaths were caused in collisions, 308 so far, with fire aboard claiming 41 lives.  (By John Osborne)
Source Citation
"Loss of Life in Steamboats in 1860," Scientific American, December 8, 1860, p. 371.
How to Cite This Page: "Statistics indicate deaths from steamboat boiler explosions down for the year 1860 ," House Divided: The Civil War Research Engine at Dickinson College, https://hd.housedivided.dickinson.edu/index.php/node/34620.