The Virginia Convention on secession is meeting in Richmond 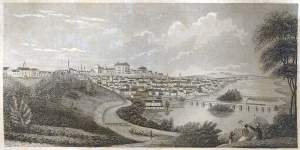 02/13/1861 - 05/01/1861
The 152 delegates were elected on February 4, 1861.  Extremists on both sides were in the minority and most favored caution or compromise.  This would change as events unfolded. The Convention first met at the House of Delegates, then the Mechanics' Hall in Richmond, and returned to the statehouse on April 8, 1861.  It sat till May 1, 1861, having voted an Ordinance of Secession on April 17, 1861. (By John Osborne)
Source Citation
Nelson D. Lankford, "Virginia Convention of 1861." Encyclopedia Virginia. Virginia Foundation for the Humanities. 10 Jan. 2011 <http://www.EncyclopediaVirginia.org/Virginia_Convention_of_1861>.
How to Cite This Page: "The Virginia Convention on secession is meeting in Richmond," House Divided: The Civil War Research Engine at Dickinson College, https://hd.housedivided.dickinson.edu/index.php/node/35582.