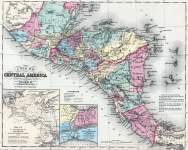 05/08/1863
The Confederación Granadina had been wracked with division and civil war since its founding in the Constitution of 1858.  A new constitutional convention met in February 1863 in Rionegro and amended the document to produce a federalist republic with a weak central government and a two year presidential term. The state was also renamed as the Estados Unidos de Colombia. In 1886, another constitution, much more conservative, once again radically changed the structure of Colombian government.  (By John Osborne)
Source Citation
Jorge P. Osterling, Democracy in Colombia: Clientelist Politics and Guerrilla Warfare (New Brunswick, NJ: Transaction Publishers, 1989), 68.
How to Cite This Page: "The Granadina Confederation reorganizes and renames itself "The United States of Colombia"," House Divided: The Civil War Research Engine at Dickinson College, https://hd.housedivided.dickinson.edu/index.php/node/39510.