On Lake Michigan, a Chicago tugboat explodes and kills most of its night crew 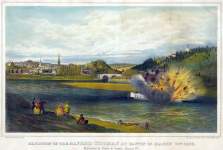 05/24/1863
Just before midnight, as she was preparing to take on a tow for the schooner Traveller just outside the port of Chicago, the tug Crawford had its boiler suddenly explode.  Three of the four men aboard were killed instantly while a fourth, a deck hand, was blown overboard and survived. The brand new tug, which had been launched only a few weeks before, sank in twenty-five feet of water and was a complete loss. (By John Osborne)
Source Citation
"Explosion of the Tug Boat Crawford: The Captain, Engineer, and Fireman Lost," Chicago Tribune, May 26, 1863, p. 4.
How to Cite This Page: "On Lake Michigan, a Chicago tugboat explodes and kills most of its night crew," House Divided: The Civil War Research Engine at Dickinson College, https://hd.housedivided.dickinson.edu/index.php/node/39585.