The press reports that a draft enroller in Berks County, Pennsylvania resigns in fear of his life 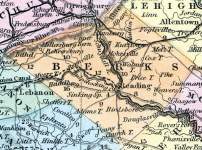 06/06/1863
According to press reports, the registering officer for the draft in Brecknock Township in Berks County, Pennsylvania, a Quaker named Joseph Dickerson, resigned his position after some severe intimidation.  Two nights before, his home was badly damaged in an attack, and the next day he was left a note telling him his "grave was dug."  Such reports became commonplace as the conscription law began to take effect.  (By John Osborne)
Source Citation
"Copperhead Resistance to the Enrollment in Berks County, Pa.," Chicago Tribune, June 10, 1863, p. 1.
How to Cite This Page: "The press reports that a draft enroller in Berks County, Pennsylvania resigns in fear of his life," House Divided: The Civil War Research Engine at Dickinson College, https://hd.housedivided.dickinson.edu/index.php/node/39794.