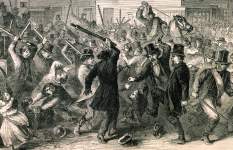 Irish-Americans from across New York City came to march down Broadway and Grand Street for the annual Saint Patrick's Parade.  The streets were still affected in places from a spring snowfall and at the intersection of Pitt Street, members of a Brooklyn branch of the Ancient Order of Hibernians were halted by a stranded wagon.  The hapless wagon driver was attacked and when police came to his rescue, full scale rioting broke out during which more than twenty police were injured before the rioters were dispersed.  (By John Osborne)

"Serious Affray Between the Police and One of the Brooklyn Societies," New York Times, March 19, 1867.