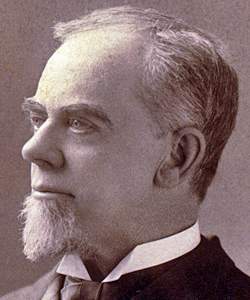 John Fletcher Hurst was the son of a slaveholding Maryland farmer who rose to become a prominent Methodist bishop and founder of American University. He was born near Salem, Maryland on August 17, 1834, the only son of Elijah and Ann Colston Hurst. He was educated locally and then entered Dickinson College with the thirty-six member class of 1854. After graduation, he taught, flirted with the law profession, and travelled in Europe. He returned to be licensed to preach in the Newark Methodist Conference and spent the Civil War years as pastor in Passaic and Elizabeth. He had married Catherine La Monte in 1859 and the couple eventually had three sons and a daughter. In 1866, he was back in Europe at the Methodist Mission Institute in north Germany. He returned to New Jersey and in 1873 was named president of Drew University. From 1880 onwards, after having been appointed a bishop, he was an untiring organizer and inspector of Methodist endeavors all over the United States, Europe and Asia. Now one of the most famous names in American Methodism, in 1888 he became the bishop of Washington D.C. and immediately set to work on what would become American University. He selected the site, raised funds, and served as the first Chancellor of the new Methodist institution. During this time he became a close friend of Congressman and, later, President McKinley. Hearst died at his home in Washington in 1903 after a series of strokes, two years after his retirement from the episcopate. (By John Osborne)
Life Span
08/17/1834 to 05/04/1893
Dickinson Connection
Class of 1854
How to Cite This Page: "Hurst, John Fletcher," House Divided: The Civil War Research Engine at Dickinson College, https://hd.housedivided.dickinson.edu/index.php/node/5951.