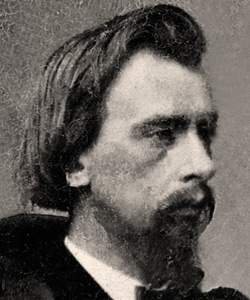 John Nicolay was a young journalist who became Abraham Lincoln's top White House aide and later one of his official biographers. Nicolay was born in Germany and came to the United States in 1838 as young child. He came to Lincoln's attention while editing the Pike County Free Press in the 1850s and traveled with the President-Elect in 1861. Nicolay served in the White House with John Hay. The two became close friends and share a deep mutual admiration for Lincoln, whom they dubbed "The Tycoon." Nico, as Hay called him, was the senior aide, though both men were young --Nicolay was in his early thirties and Hay was in his mid-twenties during the war. The president praised his senior assistant as "entirely trustworthy" but other figures in wartime Washington found Nicolay difficult to engage. Journalist Noah Brooks once described Nicolay in public as a "grim Cerberus of Teutonic descent," a reference to the three-headed guard-dog at the gates of Hell from Greek mythology. After Lincoln's assassination, Nicolay served as a diplomat and then as marshal for the U.S. Supreme Court. Nicolay co-wrote a ten volume biography of Lincoln with John Hay that was published in 1890. (By Matthew Pinsker)
Life Span
02/26/1832 to 09/26/1901
How to Cite This Page: "Nicolay, John George," House Divided: The Civil War Research Engine at Dickinson College, https://hd.housedivided.dickinson.edu/index.php/node/6317.