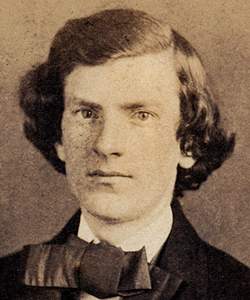 James Lester Shipley was born on June 21, 1838 in Baltimore, Maryland. He joined Dickinson’s Class of 1860 in 1857. After leaving his initial desire to become a civil engineer he joined the ministry, serving in Virginia and Maryland. Though Shipley did not directly enlist in the Confederate Army, he did act as a chaplain for a brief period in General "Stonewall" Jackson's Brigade. He married Elizabeth Augusta Gere Shipley in 1865, bore four children, and later died in Bedford, Virginia on June 11, 1937. (By Brandon Rothenberg)
Life Span
06/21/1838 to 06/11/1937
Dickinson Connection
Class of 1860
How to Cite This Page: "Shipley, James Lester," House Divided: The Civil War Research Engine at Dickinson College, https://hd.housedivided.dickinson.edu/index.php/node/6571.