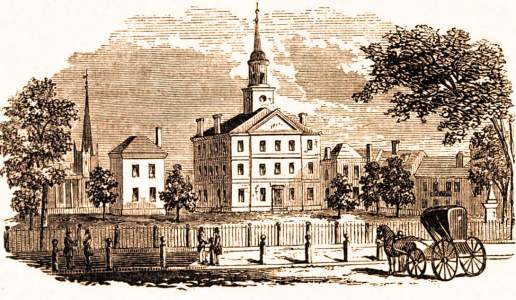 LEXINGTON, city, seat of justice of Fayette co., Ky., 24 ms. S. E. of Frankfort, situated on a branch of Elkhorn river, 70 miles from Louisville, and 515 from Washington. It is the oldest town in the state, and was formerly the capital... A large public square adorns the centre of the place, which is surrounded by stately private mansions. The public buildings are, a courthouse, Masonic hall, jail, state lunatic asylum, and the halls of the Transylvania university, together with several churches and academies, and the hospitality and intelligence of its citizens, and render it a desirable southern residence. The population in 1820, was 5,283; in 1830, 6,408; in 1840, 6,984; in 1850, ---. (Fanning's, 1853)
How to Cite This Page: "Lexington, KY," House Divided: The Civil War Research Engine at Dickinson College, https://hd.housedivided.dickinson.edu/index.php/node/9082.