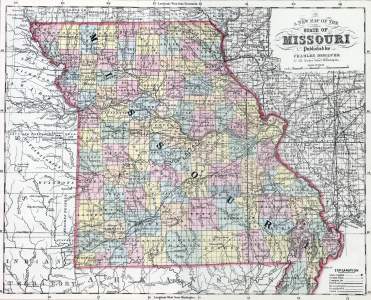 Boundaries and Extent. — Missouri is bounded north by the State of Iowa; east by the Mississippi River, which separates it from the States of Illinois, Kentucky, and part of Tennessee; south by the State of Arkansas; and west by the Indian Territory, and by the River Missouri, dividing it from the Deserts of Nebraska. It extends from 36° to 40° 36' north latitude, and lies between 89° and 95° 45' west longitude. Its area is estimated at 67,380 square miles, being about 278 miles in length by 235 in breadth. (Gazetteer of the United States of America, 1854)