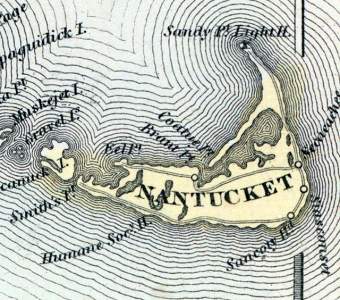 Nantucket, Ms., county and town.... The town is situated at the bottom of a bay, on the N. side-of the island, made by two points of the beach, nearly three fourths of a mile apart, on one of which, called Brant Point, is a lighthouse. The harbor of Nantucket is good, with seven and a half feet of water at low tide on the bar at its mouth. The town is built on a site where the ground ascends more rapidly from the water than at almost any other part of the shore. It embraces nearly all the houses on the island, and is very compactly built. Many of the streets are very narrow, and the houses are mostly constructed of wood. (Gazetteer of the United States of America, 1854)
How to Cite This Page: "Nantucket, MA," House Divided: The Civil War Research Engine at Dickinson College, https://hd.housedivided.dickinson.edu/node/11861.