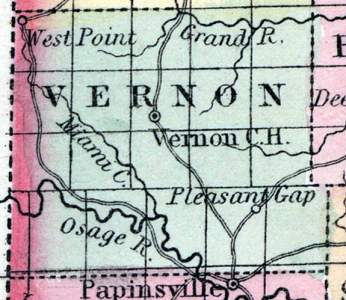 Formed in 1851 from a portion of Bates County.

VERNON, a new county in the W. part of Missouri, bordering on the Indian Territory. It is intersected by the Osage and South Grand rivers, and also drained by the Deepwater and Miami creeks. This county is not included in the census of 1850. The soil and productions are similar to those of Cass and Bates counties, out of which it was formed. County seat not yet located.  (Baldwin & Thomas, A New and Complete Gazetteer of the United States ... 1854)