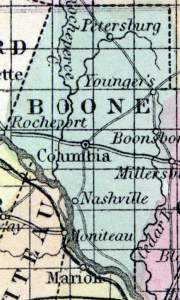 COLUMBIA, a flourishing and handsome post-village, capital of Boone county, Missouri, is pleasantly situated 35 miles N. N. W. from Jefferson City, and 10 miles from the Missouri river. It is the seat of the State University: the building is a large and elegant structure, built by the citizens of Boone county. To secure the location of this university, the citizens of the county subscribed and have paid :$120,000 ; of which sum about $75,000 were expended in the erection of the building. Columbia contains 4 churches and 1 newspaper office. The surrounding country is highly productive and comparatively populous. (Baldwin & Thomas, A New and Complete Gazetteer of the United States ... 1854)

COLUMBIA, The county seat of Boone county, Columbia township, about 120 miles from St. Louis, and 33 miles from Jefferson City, was first settled by Richard Gentry, Esq., in the year 1821.  It is beginning to become a place of considerable importance, and is eligibly situated, both for a mercantile and manufacturing town.  It contains three churches, viz., Presbyterian, Methodist, and Baptist Reformed, also two flourishing colleges, the Christian and the Baptist.  The State University is located here, an excellent institution of learning, which has been in successful operation for several years.  Two papers are published, viz., the Missouri Statesman and the State Argus, both weeklies.  The Boone County Agricultural and Mechanical Association, make this their head quarters.  The soil in this region of the country is rich and productive, the chief productions being wheat, corn, and oats.  Population 3,000.  (The Missouri State Gazetteer and Business Directory, 1860)