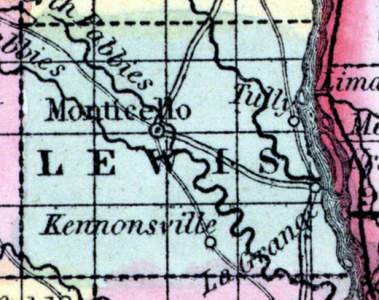 LEWIS, a county in the E. N. E. part of Missouri, has an area of 520 square miles. The Mississippi river forms its eastern boundary, and separates it from Illinois. The Wyaconda flows through the N. E. part into the Mississippi ; the North Fabius river flows through the middle of the county, the South Fabius through the S. W. part, and the Middle Fabius enters the North Fabius near the county seat. The surface is diversified; about half of the county is well timbered with forests, distributed along the rivers, and separated by beautiful upland meadows or prairies, the soil of which is deep, remarkably fertile, and easily cultivated. Indian corn, wheat, oats, grass, hemp, cattle, and pork are the staples. In 1850 the county produced 336,730 bushels of corn; 68,527 of wheat; 67,104 of oats; 2224 tons of hay, and 94,861 pounds of butter. It contained 11 churches, 1 newspaper office; 1178 pupils attending public schools, and 45 attending academies or other schools. Coal has been discovered in several places. Limestone underlies a part of the county. Capital, Monticello. Population, 6578, of whom 5372 were free, and 1206, slaves. 598.   (Baldwin & Thomas, A New and Complete Gazetteer of the United States ... 1854)