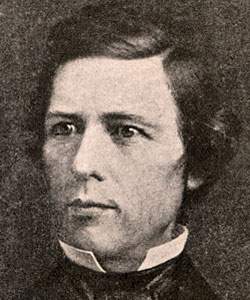 David Wilmot was a politician and lawyer known for his commitment to containing slavery, outlined in his influential Wilmot Proviso. Born in 1814, in rural Bethany, Pennsylvania, Wilmot began studying law in the 1830s, when he married Anne Morgan, with whom he raised three children. A Democrat, Wilmot began serving in the U. S. House of Representatives in 1845. During his first term, he proposed an amendment to an appropriations bill calling for the exclusion of slavery from any territory gained from Mexico as a result of the war. Although the amendment passed the House, it failed in the Senate. Despite numerous votes on the Proviso over the next couple of years, the measure did not become law. Wilmot left Congress in 1851. During the 1850s, he served as a judge in Pennsylvania and ran unsuccessfully for governor. Wilmot was a founder of the Republican Party in Pennsylvania and prominent political figure in the years before the Civil War. In 1860, he supported Abraham Lincoln for president. Wilmot returned to Washington and served in the U. S. Senate from 1861-1863, and then received an appointment as a federal judge in the U. S. Court of Claims where he remained until his death in 1868. (By David Gillespie)
Life Span
01/20/1814 to 03/16/1868
How to Cite This Page: "Wilmot, David," House Divided: The Civil War Research Engine at Dickinson College, https://hd.housedivided.dickinson.edu/node/16912.