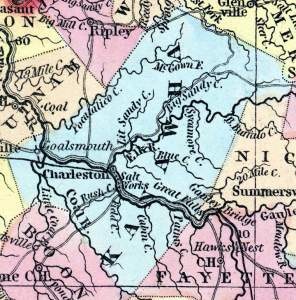 Charleston, the seat of justice for the county, is 308 miles W. of Richmond, and 46 miles E. of the Ohio River. It is a neat and flourishing village on the north bank of the Kanawha... The Kanawha is here a beautiful sheet of water, more than 300 yards wide, and is navigated by steamboats. The state turnpike, the principal thoroughfare from Richmond to Guyandotte on the Ohio, passes through the town. Fine sandstone and bituminous coal abound in the vicinity. (Historical Collections, 1852)