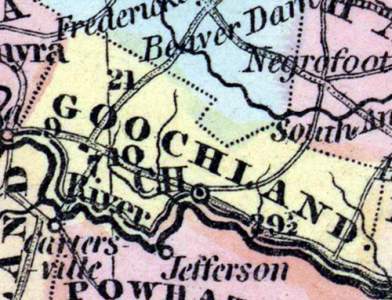 GOOCHLAND was formed in 1727... The surface is undulating, and in some places broken; the soil is various, and much of it exhausted, though naturally good; that on the James is of great fertility. It is drained by several small streams, several of which afford water-power. The county produces large crops of tobacco, corn, and oats. Bituminous coal of an excellent quality is extensively mined, and also small quantities of gold. Pop., whites 3,570, slaves 5,500, free colored 690; total 9,760. (Historical Collections, 1852)
How to Cite This Page: "Goochland County, VA," House Divided: The Civil War Research Engine at Dickinson College, https://hd.housedivided.dickinson.edu/node/18125.