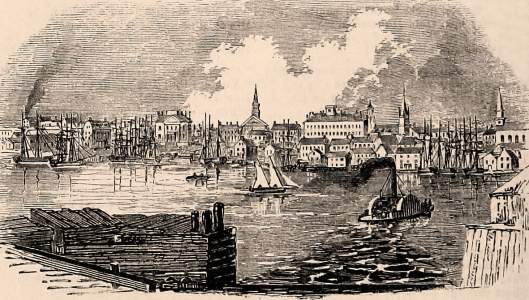 Bath, Me., city,... is built on a gentle declivity, and extends from a mile and a half to two miles along the river, and nearly a mile back. It is handsomely laid out, and contains several elegant church edifices, and other buildings, public and private, which are an ornament to the place. — The principal business of Bath is commerce, trade, and ship building, particularly the latter, for which it is admirably well located. This place ranks as the third in the United States in respect to this important interest. The tonnage of the district of Bath including the waters of the Kennebec River, in 1850 was 103,795... Regular lines of steamboats ply between this place and Portland and Boston, about three fourths of the year. A branch railroad connects it with the Portland and Augusta Railroad at Brunswick, about 8 miles distant. (Gazetteer of the United States of America, 1854)

How to Cite This Page: "Bath, ME," House Divided: The Civil War Research Engine at Dickinson College, https://hd.housedivided.dickinson.edu/node/19001.