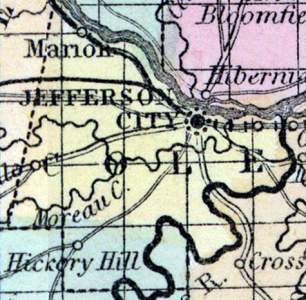 COLE, a county in the centre of Missouri, has an area of 410 square miles. The Missouri river forms the boundary on the N. E., the Osage river on the S. E., and it is intersected by Moreau creek. The Osage river enters the Missouri river at the eastern extremity of the county. The surface is broken, and some parts are too rocky for cultivation ; but the soil of the river bottoms is productive. The county is well timbered with black walnut, hickory, sugar-maple, and other trees. Indian corn, wheat, oats, cattle, and swine are the staples. In 1850 there were raised 220,173 bushels of corn;, 31,262 of wheat, and 43,769 of oats. It contained 17 churches, 2 newspaper offices, and 725 pupils attending public schools. Limestone and burrstone are abundant in the county ; quarries of good building stone have been opened at Jefferson City. Named in honor of Squire Cole, an Indian-fighter and pioneer. Cole county is important on account of containing Jefferson City, the capital of Missouri. Population, 6696, of  whom 5717 were free, and 979, slaves.  (Baldwin & Thomas, A New and Complete Gazetteer of the United States ... 1854)