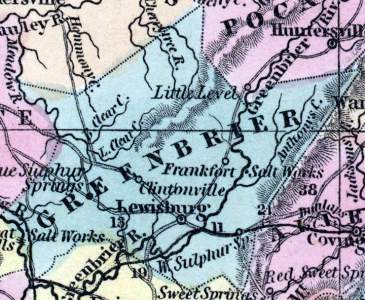 Lewisburg, the seat of justice for the county, lies on the James River and Kanawha turnpike;... It contains 6 mercantile stores, 1 newspaper printing office, 1 Baptist, 1 Presbyterian, and 1 Methodist church, 1 academy, and a population of about 800. It is a flourishing village, the most important in this whole region, and the place where the western branch of the court of appeals hold their sittings. (Historical Collections, 1852)
How to Cite This Page: "Lewisburg, VA," House Divided: The Civil War Research Engine at Dickinson College, https://hd.housedivided.dickinson.edu/node/20233.