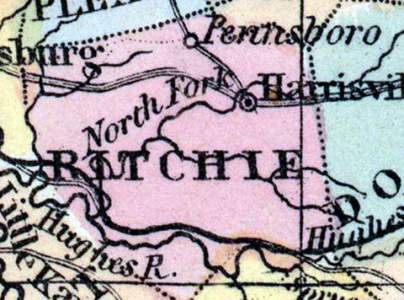 RITCHIE was formed in 1843, from Harrison, Lewis, and Wood, and named in honor of Thomas Ritchie, Esq.: it is about 25 miles long, and 20 broad. The surface is generally hilly and broken, and the soil not fertile, except on the streams, where there is considerable champaign country…Estimated population of the county, 1,800. (Historical Collections, 1852)
How to Cite This Page: "Ritchie County, VA," House Divided: The Civil War Research Engine at Dickinson College, https://hd.housedivided.dickinson.edu/node/20590.