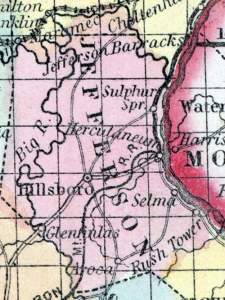 JEFFERSON, a county in the E. part of Missouri, bordering on the Mississippi river, which separates it from Illinois, has an area of 654 square miles. Big river flows through the county from south to north, and falls into the Maramec, which forms part of the northern boundary. The county is also drained by Plattin, Joachim, and Sandy creeks. The northern and eastern parts are generally level and fertile ; the western portion is hilly and sterile, Indian corn, wheat, oats, hay, cattle, and pork are the staples. In 1850 this county produced 289,116 bushels of corn; 17,322 of wheat; 35,441 of oats; and 751 tons of hay. It contained 5 churches, and 281 pupils attending public schools. The hills contain rich mines of lead ; copper and cobalt are found in smaller quantities. The Mammoth mine has yielded many thousand pounds of lead. Capital, Hillsborough. Population, 6928, of whom 6416 were free, and 512, slaves. (Baldwin & Thomas, A New and Complete Gazetteer of the United States ... 1854)