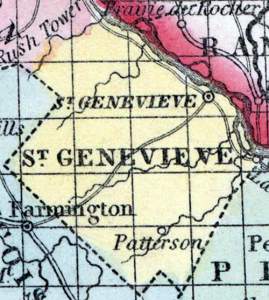 ST.GENEVIEVE, a county in the E. S. E. part of Missouri, has an area estimated at 400 square miles. It is bounded on the N. E. by the Mississippi river, which separates it from Illinois, and drained by Riviè​re aux Vases, Isle au Bois, Saline, and Establishment creeks. The surface is hilly and broken ; the soil of the river bottoms and valleys is fertile. Indian corn, wheat, oats, and grass are cultivated. Limestone, lead, and white sand are extensively exported. In 1850 the county produced 195,214 bushels of corn; 30,183 of wheat, and 34,413 of oats. It contained 8 churches, 2 newspaper offices ; 260 pupils attending public schools, and 145 attending academies or other schools. Extensive mines of lead and copper, and quarries of marble are worked. A plank-road about 40 miles long extends from the county seat to the Iron mountain. Capital, St. Genevieve. Pop., 5313, of whom 4697 were free, and 616, slaves. (Baldwin & Thomas, A New and Complete Gazetteer of the United States ... 1854)