The Congress of the Confederate States ends its first session in Montgomery, Alabama 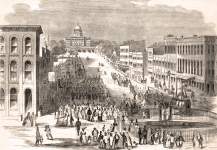 The Congress of the Confederate States sitting in Montgomery, Alabama with representatives from the seceded states of Alabama, Florida, Georgia, Louisiana, Mississippi, and South Carolina, and Texas, ended its first session. In six weeks the body produced a new constitution, formed an executive branch, and passed legislation that established up much of the structure of the Confederacy. (By John Osborne)