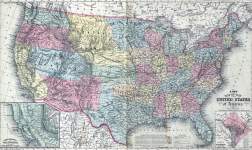 06/04/1859 - 06/05/1859
Remarkably unseasonable temperatures below freezing were felt overnight in many of the northern states, particularly New York, Pennsylvania, Ohio, Illinois, and Indiana. Hundreds of thousands of dollars worth of fruit and vegetables, along with wheat, corn, rye, and potatoes were lost. One memoir from northern Ohio related that "had a sheet of living flame passed over the earth the preceding night, the vegetation that covered its hills and valleys could not have presented a more desolate appearance." (By John Osborne)
Source Citation
Horace S. Knapp, A History of the Pioneer and Modern Times of Ashland County: From the Earliest to the Present Date (Philadelphia: J.B. Lippincott & Co., 1863), 81.
James Ford Rhodes, History of the United States From the Compromise of 1850, Volume III  (New York: Harper and Brothers, 1900), 56.
How to Cite This Page: "An unprecedented late spring frost causes massive crop damage across the northern United States," House Divided: The Civil War Research Engine at Dickinson College, https://hd.housedivided.dickinson.edu/node/22687.