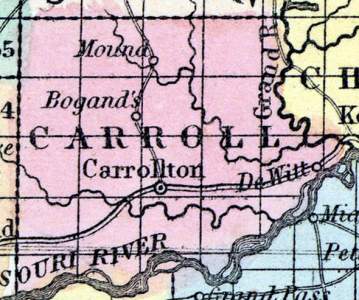 CARROLLTON, The county seat of Carroll county, Wakonda township, about 180 miles from St. Louis, and 90 from Jefferson City, was first settled by James Standley, in March 1818.  It contains one Baptist and one Presbyterian church, a Masonic lodge, viz., Wakonda, No. 52, numbering 100 members, and Philadelphia lodge, No. 38, I.O.O.F., 45 members.  It supports a weekly paper called the Carrollton Democrat, which was started in the summer 0f 1857.  There is also a Seminary, the reputation of which stands high for the education of both male and female.  The object of the trustees of this institution is one that will afford all necessary advantaged, comforts, and facilities for a thorough, extensive and finished education.  It will be found an institution liberal in character, and affording such ample facilities, that no parent will be under the necessity of sending his child and money to a distant school, in order to have him properly educated; an Institution at home that will fully meet the wants of the citizens of Carrollton and vicinity, so rapidly increasing in population and in resources to educate their children.  It is situated on a beautiful eminence in the Southern suburbs of Carrollton, and commands a prospect of many miles in extent, surrounded by every convenience --- easy of access from every point, and healthy.  There are suitable rooms for the various departments.  Three hundred students can be accommodated.  The town is progressing gradually, the situation is healthy and the people noted for industry and enterprise.  Population 1000.  (The Missouri State Gazetteer and Business Directory, 1860)