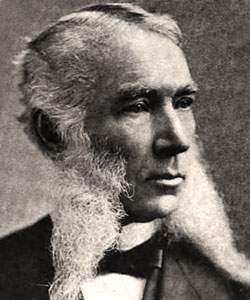 Samuel Preston Moore was a career military surgeon who took on the herculean task of building and overseeing the medical service of the Confederate States Army as Surgeon-General. He served in this post from July 1861 till the end of the war through all the travails of blockade and dwindling southern resources. Moore was born in Charleston, South Carolina and graduated from the medical school at the University of South Carolina in 1835. Soon after, he joined the army and served as a U.S. Army doctor for twenty-five years of eventful service in Mexico, the West, and in Florida. He married Mary Augusta Brown, the daughter of one of his commanding officers in June 1845. Above medium height, genial but firm in his dealings with his fellow soldiers, he was a respected and experienced major in 1861 when succession brought his resignation. His service as Surgeon-General seems remarkable considering the obstacles he faced. He introduced the single-story military hospital plan that was largely used on both sides by the end of the war, built laboratories to synthesize medicines, and even explored the use of drugs from indigenous southern plants. To alleviate the shortage of medical books in the C.S.A., he wrote a manual published in 1863 and used throughout the south. Following the war, he stayed in Richmond, forsook the practice of medicine, and instead worked to help set up the public education of that city. He died there in 1889 and was buried in the Hollywood Cemetery. (By John Osborne)
Life Span
09/16/1813 to 05/31/1889
How to Cite This Page: "Moore, Samuel Preston," House Divided: The Civil War Research Engine at Dickinson College, https://hd.housedivided.dickinson.edu/node/27179.