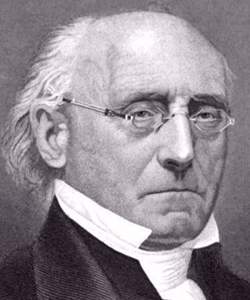 Benjamin T. Onderdonk was born in New York City. He was educated at Columbia University and ordained as an Episcopal priest in August 1812. He married Eliza Handy. His elder brother, Henry, had become assistant Episcopal Bishop of Pennsylvania in 1827 and he himself was consecrated as the fourth Episcopal Bishop of New York in November, 1830. He gained notoriety first with his apparent support for the Oxford Movement and, by implication, Roman Catholicism in the contentious case of his ordination of Oxford Movement supporter Arthur Carey in 1843. The following year Bishop Onderdonk faced even more sensational charges of improper sexual conduct with female parishioners. Several women came forward, including the wife of one of his clergymen, and clear evidence of sexual harassment was presented at an extended trial. Still, as the charges had originated with the more conservative southern bishops, including the Bishop of Virginia, some saw the accusations as politically motivated and following on from the Carey case. Onderdonk was found guilty and suspended from office in 1845. The controversy went on for more than a decade during which time a virtual war of words raged but Onderdonk remained under suspension and “temporary” bishops sat for New York. New York Episcopalians made several attempts to have him reinstated, the final effort in September 1859, but all failed. He died, still under suspension, at his home in New York City in April 1861 and was buried in the Trinity Church Cemetery. (By John Osborne)
Life Span
07/15/1791 to 04/30/1861
How to Cite This Page: "Benjamin Treadwell Onderdonk," House Divided: The Civil War Research Engine at Dickinson College, https://hd.housedivided.dickinson.edu/node/28226.