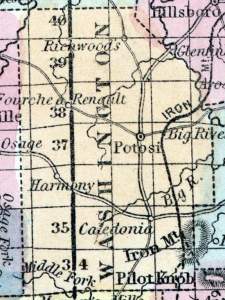 WASHINTON, a county in the E. S. E. part of Missouri, has an area of 1000 square miles. The Maramec river washes its N. W. border. The Big river rises in the county, and forms part of the N. E. boundary ; it is also drained by the head streams of the Big Black river, and by Courtois and Indian creeks. The surface is generally hilly and broken, and covered with forests. Indian corn, wheat, oats, hay, and butter are the staples of agriculture. In 1850 the county produced 334,348 bushels of corn ; 30,279 of wheat; 79,112 of oats, and 69,639 pounds of butter. It contained 10 churches, and 400 pupils attending public schools. The county is chiefly remarkable for its mineral resources. Iron and lead are the most abundant. The Iron mountain, on the S. E. border, is described as "literally a mountain of magnetic iron ore," rising about 300 feet above the plain, and measuring a mile and a half across the summit. Numerous lead mines have been opened near Potosi. Silver, copper, plumbago, copperas, chalk, and limestone are also found. A railroad is progressing from St. Louis to the Iron mountain. Capital, Potosi. Population, 8811, of whom 7736 were free, and 1075, slaves.  (Baldwin & Thomas, A New and Complete Gazetteer of the United States ... 1854)