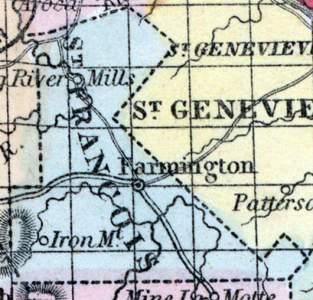 ST. FRANCOISE, a county in the E. S. E. part of Missouri, has an area of about 350 square miles. It is traversed from S. to N. by Big river, an affluent of the Maramec river, and also drained by the sources of St. Francis river, flowing southward. The surface is hilly and broken, and partly covered by forests of pine and other timber. The soil is moderately fertile. Indian corn, wheat, oats, hay, cattle, and swine are the staples. In 1850 the county produced 226,759 bushels of corn; 14,741 of wheat, and 32,191 of oats. It contained 7 churches, and 277 pupils attending public schools. The celebrated Iron mountain is partly included within it. Extensive iron works are in operation near the mines, and a plank-road extends from them to the Mississippi river. Capital, Farmington. Population, 4964 ; of whom 4284 were free, and 680, slaves. (Baldwin & Thomas, A New and Complete Gazetteer of the United States ... 1854)