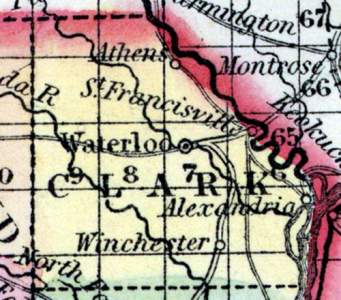 CLARKE(sic), a county forming the N. E. extremity of Missouri, has an area of 516 square miles. It is situated on the Mississippi, at the mouth of the Des Moines, the latter of which forms its boundary on the N. E., separating it from Iowa, and the former separates it from Illinois. The county is intersected by the Fox and Wyaconda rivers. The surface is undulating or nearly level. More than half of the county consists of fertile upland prairies, some of which are several miles in width, with forests of good timber distributed along the watercourses. Indian corn, wheat, oats, hay, cattle, and swine are the staples. In 1850 this county produced 320,970 bushels of corn; 48,936 of wheat; 50,896 of oats, and 2023 tons of hay. It contained 6 churches, and 1246 pupils attending public schools. The population has increased rapidly for several years past. It was named in honor of Willian Clarke, of the expedition of Lewis and Clarke, afterwards governor of Missouri territory. Capital, Alexandria (sic). Population, 5527, of whom 5023 were free, and 504, slaves. (Baldwin & Thomas, A New and Complete Gazetteer of the United States ... 1854)