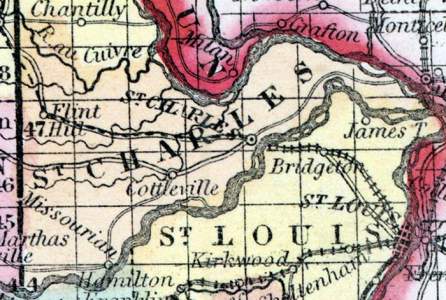 ST. CHARLES, a county in the E. part of Missouri, occupies a neck of land formed by the confluence of the Missouri with the Mississippi ri.ver; area, about 480 square miles. The Mississippi river forms the boundary on the N. E., and separates it from Illinois. It is also drained by Cuivre river, and by Dardenne, Peruque, and Femme Osage creeks. The surface is alternately hilly, rolling, and level. A range of highlands terminates about 3 miles below St. Charles, in a beautiful and romantic pile of naked bluffs, called the " Mammelles." The soil is generally fertile. Indian corn, wheat, oats, butter, and tobacco are the staples. In 1850 the county produced 658.001 bushels of corn; 122,902 of wheat; 114,658 of oats; 122,390 pounds of butter, and 210,712 of tobacco. It contained 24 churches, 1 newspaper office; 788 pupils attending public schools, and 200 attending academies and other schools. Limestone generally underlies the county. Extensive mines of stone coal are worked in several places. Capital, St. Charles. Population, 11,454, of whom 9505 were free, and 1949, slaves.  (Baldwin & Thomas, A New and Complete Gazetteer of the United States ... 1854)