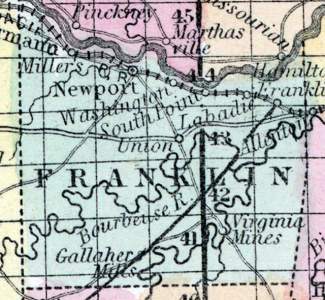 FRANKLIN, a county in the E. part of Missouri, has an area of 874 square miles. It is bounded on the N. by Missouri river, intersected by the Maramec and Riviere au Boeuf, and also drained by Bourbeuse, Berger, St. .John's, and Indian creeks. The surface is undulating and hilly; the soil is mostly fertile, especially on the bluffs of the Missouri, and along the other streams. The timber is good and abundant. Indian corn, wheat, oats, hay, tobacco, cattle, and swine are the staples. In 1850 the county produced 521,382 bushels of corn; 51,960 of wheat: 72,103 of oats ; 1067 tons of hay, and 656,821 pounds of tobacco, of a superior quality. It contained 18 churches, 461 pupils attending public schools, and 75 attending academies or other schools. Large quantities of copper, lead, and iron are found on the banks of Maramec river and Bourbeuse creek. Two iron furnaces are kept in constant operation. Mines of copper and lead have been opened in numerous places, and yield good profits. It is plentifully supplied with water-power. The Maramec river has been navigated by small steamboats in the county, and with little improvement it would be navigable to the Virginia mines. The route of the Pacific railway has been surveyed through the county. Capital, Union. Population, 11,021, of whom 9562 were free, and 1459, slaves. (Baldwin & Thomas, A New and Complete Gazetteer of the United States ... 1854)