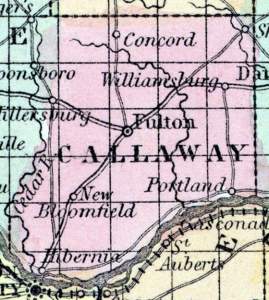 CALLOWAY, a county in the E. central part of Missouri, on the N. bank of the Missouri river, contains 743 square miles. It is drained by Cedar creek and other small streams. The surface is gently undulating, and the soil is highly productive both on the river bottoms and the uplands. About one- third of the county is prairie. The principal productions are wheat, corn, oats, tobacco, and hemp. Many horses, , mules, and horned cattle are reared for exportation. In 1850 this county produced 811,885 bushels of corn; 50,178 of wheat; 184,418 of oats ; 886,800 pounds of tobacco, and 177,369 pounds of butter. The crop of oats was greater than that of any other county in the state, excepting Greene county ; and the quantity of hay was exceeded only by Howard county. It contained 31 churches and 1 newspaper establishment. Large beds of cannel coal, bituminous coal, iron ore, and fine limestone underlie the greater part of the county. A stratum of cannel coal, 24 feet thick, has been opened near the river. Fine potter's clay is abundant, and is extensively manufactured. The county was organized in 1820, and is among the most populous in Missouri. Capital, Fulton. Population, 13,827, of whom 9920 were free, and 3907, slaves. (Baldwin & Thomas, A New and Complete Gazetteer of the United States ... 1854)