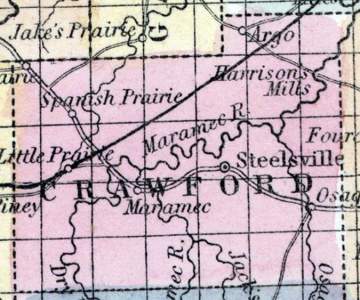 CRAWFORD, a county in the S. E. central part of Missouri, has an area of 1380 square miles. It is intersected by the Maramec river, and also drained by the Osage fork and Dry fork of that river, and by the head streams of Bourbeuse creek. The surface is uneven, and in some parts hilly; the valleys and river 'bottoms contain some excellent land, and the hills afford valuable timber. The county contains several prairies -which are moderately fertile. Indian corn, wheat, oats, hay, cattle, and pork are the staples of agriculture. In 1850 this county produced 297,133 bushels of corn; 26,482 of wheat; 48,440 of oats, and 597 tons of hay. It contained 7 churches ; 280 pupils attending public schools, and 40 attending academies or other schools. This county is remarkable for its rich mines of iron, copper, and lead, all of which are worked with success, and the first quite extensively. The iron and copper are found in the sterile hills, in the vicinity of the Maramec river. Stone coal has recently been discovered in the same district. The mineral region is estimated to comprise about two-thirds of the county. Massie's iron works, on the Maramec river, have been in operation many years, employing from 50 to 150 hands. The streams of the county afford extensive water-power. Capital, Steelville. Population, 6397, of whom 6112 were free, and 285, slaves.  (Baldwin & Thomas, A New and Complete Gazetteer of the United States ... 1854)