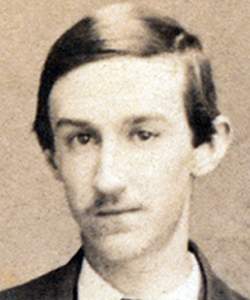 The son of a Union cavalry officer, Edgar Everett Hastings remained at college during the Civil War and later became a Harvard-educated lawyer. He was born in Fort Moultrie, South Carolina on December 20, 1846. His father, Captain David H. Hastings, and his mother, Jane, moved the family to Carlisle, Pennsylvania by the time that Hastings was three years old. He was the eldest of seven children and graduated from the Dickinson Grammar School in 1860. The family probably lived in the military garrisons at the Carlisle Barracks. Young Hastings’s life does not appear to have been much affected by the war. He entered Dickinson College as a freshman in October 1861 at age fifteen and graduated in 1865. While at Dickinson, Hastings was a member of the Union Philosophical Society and Theta Delta Chi, an illegal fraternity. Hastings went on to graduate from Harvard Law School in 1867. He moved to Parsons, Kansas, and worked as a lawyer from 1868 to 1873 before returning to the East Coast to live with his parents in Baltimore. Hastings worked as a ticket agent for the Pennsylvania Railroad in Washington D.C. from 1881 until his death in 1901. He married Margaret Morris, a native of Washington D.C., on May 11, 1886, and their daughter Edgarina was born in August 1887. Towards the turn of the century, the family lived with Margaret’s brother, Martin F. Morris, in Washington D.C. Hastings died on February 9, 1901. (By Holly Bowers)
Life Span
12/20/1846 to 02/09/1901
Dickinson Connection
Class of 1865
How to Cite This Page: "Hastings, Edgar Everett," House Divided: The Civil War Research Engine at Dickinson College, https://hd.housedivided.dickinson.edu/node/28680.