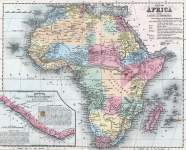 02/04/1859
The Codex Sinaiticus is the oldest known complete version of the Bible, dating from the middle of the fourth century, written in Greek on 346 parchments.  The German biblical scholar Constantin Tischendorf discovered the manuscript in an ancient Greek monastery of Saint Catherine on Mount Sinai in Egypt.  The manuscript made its way to Imperial Russia and in 1933 Joseph Stalin sold it to the British Museum for £100,000.  (By John Osborne)
Source Citation
Paul William Roberts, River in the Desert: A Modern Traveller in Ancient Egypt (London: I.B. Tauris and Co., 2006), 272.
How to Cite This Page: "The Codex Sinaiticus, oldest known complete Bible, discovered in Egypt," House Divided: The Civil War Research Engine at Dickinson College, https://hd.housedivided.dickinson.edu/node/29321.