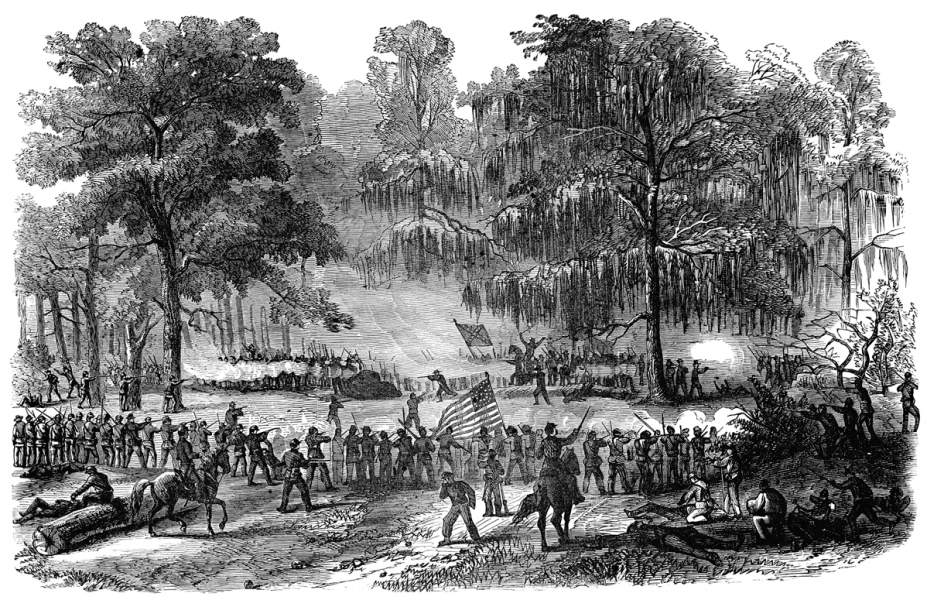 Scanned by
Florida Center for Instructional Technology
Notes
Cropped, edited, and prepared for use here by Don Sailer, Dickinson College, November 19, 2009.
Depicted ContentNear Grand Coteau, Louisiana, Confederate forces defeat Union infantry in the battle of Bayou Bourbeau
Image type
engraving
Courtesy of
Florida Center for Instructional Technology, http://etc.usf.edu/clipart
Original caption
Battle of Grand Coteau, La., November 3rd, furious attack on the Sixtieth Indiana, Colonel Owen
Source citation
Frank Leslie, Famous Leaders and Battle Scenes of the Civil War (New York: Mrs. Frank Leslie, 1896), 391.
Source note
"Battle of Grand Coteau, La., November 3rd, furious attack on the Sixtieth Indiana, Colonel Owen. On the 3rd of November, 1863, the enemy, about six thousand strong, under General Green, attacked in force; but the Seventeenth Ohio Battery kept them at bay, supported by the Eighty-third Ohio, the Sixtieth Indiana watching the flank. A lull soon occurred, and the Sixtieth was sent to hold a bridge and small bayou on the skirt of the woods. This they did, and at last, by Burbridge's order, advanced till friend and foe were so mingled in strife that cannon could not be used; but finally the Sixtieth Indiana, with the Ninety-sixth Ohio and the Twenty-third Wisconsin, who come to its aid, fell back, the Twenty-third losing their brave colonel, Guppy. In this retrograde movement the enemy's mounted Texan infantry surrounded the Sixty-seventh Indiana. General Burbridge in vain endeavored to save them with a section of the Seventeenth Ohio Battery, but the Confederates closed around them so that he had to suspend his fire for fear of killing his own men, and Lieutenant Colonel Bushler, with two hundred men, surrendered to the enemy."— Frank Leslie, 1896
How to Cite This Page: "Battle of Bayou Bourbeau, November 3, 1863," House Divided: The Civil War Research Engine at Dickinson College, https://hd.housedivided.dickinson.edu/node/30021.