In Batavia, Iowa, mob of hundreds lynch murderer of a woman and her daughter 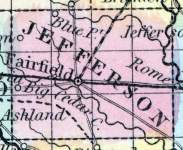 07/05/1860
Apparently, John Kephart had murdered a woman and her daughter who he had been assisting in their journey home to Missouri.  The two bodies were found in the Skunk River in Jefferson County, Iowa.  Local officials tracked Kephart to Missouri and returned him to Batavia in the county for trial on July 3, 1860.   Two days later, a large mob took him from the jail to the site of the murder.  They had him dig his grave and make a statement before hanging him.  (By John Osborne)
Source Citation
Paul Walton Black, "Lynchings in Iowa," Iowa Journal of History and Politics 10 (April 1912): 207-208.
How to Cite This Page: "In Batavia, Iowa, mob of hundreds lynch murderer of a woman and her daughter," House Divided: The Civil War Research Engine at Dickinson College, https://hd.housedivided.dickinson.edu/node/32451.