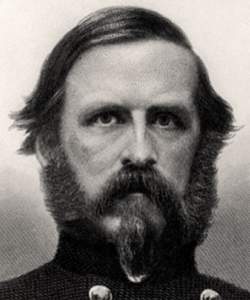 Edward A. Wild was an adventurous and committed Massachusetts Unitarian who became a controversial Civil War general and a prime mover in the recruitment of African American soldiers to Union service. The son of a Brookline doctor and a direct descendant of Roger Williams on his mother's side, he became an ardent abolitionist early in life. A Phi Beta Kappa graduate of Harvard in 1844, he studied medicine in Philadelphia, and visited Europe. In Italy, in 1849, Wild was briefly arrested by Garibaldi as a spy. His adventures continued in 1855 when, during his honeymoon in Constantinople, the Crimean War was being fought. He volunteered as a military doctor in the Turkish army and ended nine months of service as a decorated colonel. He then resumed his honeymoon. At the outbreak of the Civil War, he helped raise a company of the First Massachusetts and fought at Bull Run and Fair Oaks before losing his left arm at South Mountain. Tall, handsome and driven by conviction, Wild turned his attention to raising United States Colored Troops in his home state then took command of the first ever USCT brigade. "Wild's African Brigade" gained notoriety with its famous raids into eastern North Carolina in the fall of 1863, freeing slaves and resettling them on Roanoke Island. His troops later served at Petersburg and occupied Richmond. After the war, Wild worked with the Freedmen's Bureau in Georgia and then as a mining engineer in Nevada. He died in South America in 1891 and is buried in Medellin, Colombia. (By John Osborne)
Life Span
11/25/1825 to 08/28/1891
How to Cite This Page: "Wild, Edward Augustus," House Divided: The Civil War Research Engine at Dickinson College, https://hd.housedivided.dickinson.edu/node/32543.