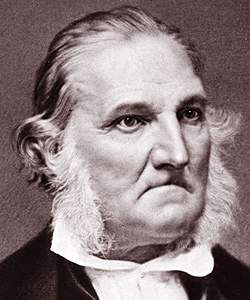 John James Audubon was a leading nineteenth century ornithologist whose collected paintings of wildlife have become some of the most iconic pictures of American birds and animals. Born Jean Rabin Fougère in Les Cayes, Santo Domingo on April 26, 1785, Audubon was the son of Captain Jean Audubon and Jeanne Rabin(e), who never married. John Audubon became his father’s legal heir in 1791 while living in France with Captain Audubon’s wife, Anne Moynet Audubon, where he was baptized Jean-Jacques Fougère Audubon. Audubon met his wife Lucy Bakewell after moving to his father’s farm in Pennsylvania in 1803. The Audubon’s had two surviving sons. Audubon turned to painting as a source of income after declaring bankruptcy. After eleven years of work, Audubon completed his masterpiece, Birds of America a four volume Elephant Folio, in 1832. Though Audubon traveled between the United States and England for his work, he settled his family in New York City in 1839 where he began his next major project with collaborator John Bachman: The Viviparous Quadrupeds of North America. Audubon painted from specimen models rather than using live animals and traveled frequently to discover new species until his stroke in 1847. Audubon never regained good health and died on January 27, 1851. A significant amount of scholarship on Audubon has been published since his death. Audubon’s letters and journals have also been published, made available, in part by Audubon’s daughter-in-law Maria. (By Rebecca Solnit)
Life Span
04/26/1785 to 01/27/1851
How to Cite This Page: "Audubon, John James," House Divided: The Civil War Research Engine at Dickinson College, https://hd.housedivided.dickinson.edu/node/32937.